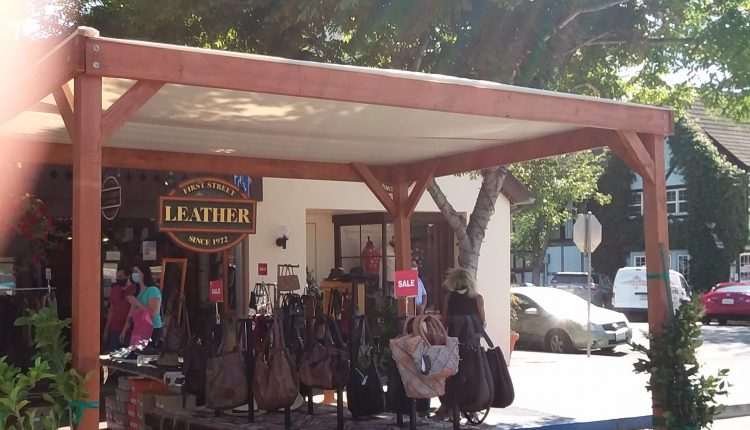 Solvang’s Copenhagen Drive may remain closed to traffic until the end of the year!

Due to ongoing COVID-19 Crisis Solvang restaurants, bars, and wine tasting rooms to serve and seat customers outdoors only!

Governor Gavin Newsom’s ordered indoor restaurants, wineries, tasting rooms, movie theaters, zoos, museums, and bars to close in Santa Barbara County and 18 other counties until the end of July. The Governor’s new order also states Solvang restaurants, bars, and wine tasting rooms to serve and seat customers outdoors only, due to the nearly 6% increase of COVID-19 cases and hospitalizations across California. The County Public health department says local guidance will be issued Thursday.

Since re-opening the state, Solvang was becoming “normal”. One retail business owner on Copenhagen Drive noted that their sales were almost caught up to last year’s sales, but this new order might again affect their and other Solvang businesses again. Due to the increase in coronavirus cases, many visitors might cancel their trips to Solvang. And the City already canceled the 4th of July and Danish Days celebrations, which are the most important tourist attractions events for the town!

Mayor Ryan Toussaint and City attorney Chip Wullbrandt met with the Copenhagen Tourism Steering Committee members and other Copenhagen business owners at the Solvang Park to discuss the possibility of expanding to allow for additional outdoor dining, drinking, and shopping for Solvang.

Presently, due to COVID-19, Solvang businesses are allowed to expand their business to the sidewalk and car park side at the frontage of their business; however, from now on non-food retailers are required to get an encroachment permit to do so.

During the Solvang Park meeting with Mayor Ryan Toussaint, many of the Copenhagen businesses expressed positive feedback about the closure of Copenhagen Drive, even most of them were opposing it before. And now they were stating they would not mind if it remains closed to traffic until the end of the year and maybe even beyond, serving as a permanent promenade in the future. Copenhagen business owners and their employees asked to leave the premium parking spots around Copenhagen Drive available for visitors to easily park, to make their outdoor experience easy and more pleasant.

RETAILERS ARE NO LONGER ALLOWED TO DISPLAY THEIR MERCHANDISE OUTSIDE BECAUSE OF SINGLE COMPLAINT :

Solvang resident and retired educator John Padfield send an email to City Council and complained about the retailers’ outdoor expansion, but for some reason specifically and criticizing and targeting only the Esko Esko store located on Alisal Rd, and accused its owner of being in illegal activities, due to a small table filled with sanitizers, masks, etc. displayed due to CORONA-19 in front of the store. The retired teacher John Padfield stated that outdoor expansion looks cheap and very bad for Solvang and for other businesses!

However, the Solvang Journal has pictured some other businesses displaying their merchandise in front of their stores and have asked visitors about their outdoor dining and shopping experiences. Most of the visitors expressed that it is a wonderful feeling to be able to eat and shop under the blue sky and that it makes them feel happy with so much social distancing, to see that Solvang was beginning to come back to life; they felt they were able to not worry as much about the coronavirus while they ate, shopped and drank.

One of the Copenhagen Drive clothing shop called Pacific Northwest Trading Co’s owner Maidy Dreyfuss (selling high-end ranch-style clothes are made to last for a lifetime of wear) said I am very much favor of outdoor expansion especially this COVID-19 time. It gives safety and much more space to us and to our customers for social distancing”

Upon John Padfield’s complaint about Esko Esko’s owner, Esko Kenny Lama to the Solvang City Council, Kenny Lama also complained to the Santa Barbara County Board of Education about the former Santa Barbara County retired educator John Padfield, for using his official business email and misrepresenting the SB County Board of Education while trying to influence the public and city officials. Esko Esko‘s owner Esko Kenny Lama said: “It’s important to note that this was a direct target by Padfield against my business since some other non-food retailers were also displaying their merchandise in front of their stores because the city was allowing it due to COVID-19 restrictions.”

Solvang’s tenants’ rent eviction moratorium extended until the end of…