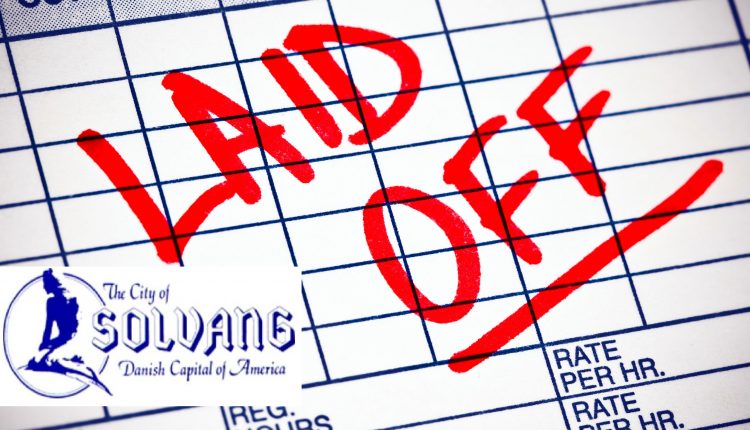 By Solvang Journal Staff
The City of Solvang layoffs all non-essential employees due to economic cessation. Including Solvang, millions of Americans have and will lose their jobs due to COVID -19 nationwide! Nearly 4 million Americans already filed for unemployment benefits last week – the largest new jobless claim in US history due to the COVID19 crisis. The Federal Reserve, Banks, and Wall Street firms are expecting unemployment claims to peak at more than 30 million as GDP collapses -10% to -25% with the most of the nation’s economy shut down.

The economic impact of the COVID-19 pandemic is ravaging the Counties’ and Cities’ budgets with no end in sight. Santa Barbara City officials have announced layoffs for “hundreds” of City employees. The City of Santa Maria has announced a hiring freeze and is reviewing staff layoffs. The City of Lompoc is also accelerating planned staff layoffs.
Heavily reliant on tourism tax revenues, the City of Solvang joined the rest of the County in cutting non-essential services and staff. As residents shelter in place and City Hall and businesses remain closed, the City was forced to shut down the Parks & Recreation and Planning Departments until further notice.

Solvang’s Mayor Ryan Toussaint stated in his press release that; “Solvang is facing unprecedented economic impacts from the closures ordered by the Governor in response to COVID-19. Yesterday, March 27, 2020, after careful review of the needs to continue providing essential services – in particular, Sheriff’s contract, water, wastewater, maintenance and critical assistance to our residents and the devastated business community – the City sadly found it necessary to lay off eight employees whose job duties do not fall within essential services categories. We had also done a thorough review of City private service provider contracts, and have either cut those contracts or shifted them to focus on the provision of essential public services and recovery. The changes to both staffing levels and contracts are focused on the need to deliver immediate emergency response, maintain essential services now and in the long run, and specialty skills needed in each of these areas.”

According to the Solvang City officials, the priority is entirely focused on maintaining essential City services such as water, sewer, and law enforcement. The lost revenue and the closure of  non- essential departments have led to the immediate reduction of the following staff:
Fred Lageman, Heidi Serbus, Alex Quiroz, Frank Saunders, Carol Newsome, Diane Christensen, and Brynda Messer. The City may recall the employees in the future as economic conditions improve.

The historic economic shock has spotlighted Solvang’s over-reliance on low spending, volume-driven, “day-tripper” tourism. Hotel and sales taxes make up nearly 70% of the City’s budget. Other County Cities derive more of their income from diversified sources such as car dealers, shopping malls and services.