Shocking appeal from City Council: “Do not allow to display flower pots along Solvang Sidewalks” 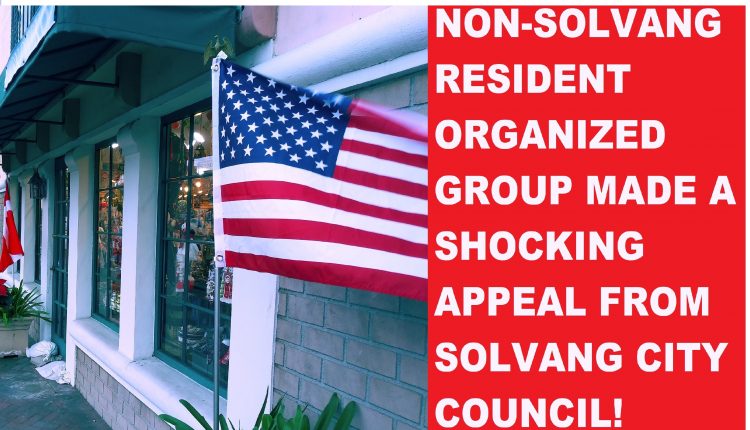 A group of non-Solvang residents appealed to the City Council to ban displayed flower pots and flags on the sidewalks of Solvang.

Solvang is known to be a city of pots with beautiful flowers. Pots can be seen all over the TRC zone because most establishments have plants, flags, and life-sized displays at their storefronts and sidewalks.

However, the City Council received a shocking complaint from some organized non-Solvang residents. The complaint was about the flower along the sidewalks and in front of Esko Esko’s Store located at Frederik’s Court, 485 Alisal Road.

Santa Ynez resident Terry Harmon who is also one of Esko Kenny Lama’s store landlord, David Rasmussen Rasmussen Store owner and their associates grouped themselves and showed up at the city council’s 10th February 2020 meeting. They appealed to the City Council to reject Esko Kenny Lama’s encroachment permit application that was supposed to settle his long-time disputed flower pots, sticking flags, and water bowls for pets along public sidewalks.

Terry Harmon, Esko Esko Store (Fredricks Court  485 Alisal Road) building owner  stated during the City Council Meeting, “An encroachment permit  would allow him  more stuff outside his shops now if you branch one encroachment permit the slippery slope and you know that there’s going to be other people that want to do it and then we have a very sloppy looking town that might look like a little bit more of a third world country instead of the beautiful charming city of Solvang.”

Another shocking speaker, Leslie Holmes,(Terry Harmon’s Secretary ) stood up and compared Solvang to the African country of Uganda!

In her words, she commented, “I would also like to speak about this (Esko Kenny Lama’s) encroachment permit. For traffic in Solvang can be very heavy at times, and with store products spilling out of storefronts, this competes with sidewalk space and creates an unpleasant ambling and sightseeing experience—not to mention a possible hazard to pedestrians. I have been to third world countries and in fact, I leave for another one this Sunday to Kampala, Uganda.” Holmes continued, “I don’t take these trips as a tourist, but nonetheless, I will expect to see the exact thing in Kampala as I have seen in other third world countries to which I have traveled where products and wares are displayed outside of storefronts. This look and practice are shabby, unappealing, and dangerous to visitors and residents alike. It is degrading to our beautiful Solvang Village. I encourage you to vote against this (Esko Kenny Lama) permit.”

Another shocking speaker was Solvang  Rasmussen’s Gift Shop
(a competitor of Esko Esko’s), owner David Rasmussen, (Terry Harmon’s friend and he also displays on the public sidewalk flowers and flags in front of his store), but he spoke against Esko Kenny Lama’s permit request too. Rasmussen explained, “I was involved in the writing of the first sign regulation when Solvang became a city and as I walk around town lately, I’m starting to see some things come back, that we were able to get rid of things like encroachment on the sidewalk be it off-premise signs or merchandise. I would tell you we’ve rewritten sign on its fourth time and each time we’ve said ‘no signs on the sidewalk,’ ‘no merchandise on the sidewalks’ and I would encourage you to enforce those regulations.”

The last shocking speaker was  Terry Harmon’s Los Olivos-based real estate agent Steve Battaglia had a similar opinion as to the others.

Battaglia expressed his thoughts by saying, “I do a lot of leasing in town for retail and office space and I’m just speaking out against offering any encroachment permits to tenants to do business outside of their premises. I think that’s a bad precedent to set, to allow them to do the display of merchandise or decor, or actually conduct business outside of their premises. I’m very protective of the city of Solvang. It’s got a beautiful Danish community, the beautiful look is welcoming to visitors and I would not want to see that harmed. So, I encourage you guys to not consider encroachment permits for ( Esko Kenny Lama’s) businesses.”

After the organized group’s shocking appeal and complaints, City Mayor Ryan Toussaint was kind of shocked about what to do or what to say so he let to comment about it by Solvang City Attorneys Chip Wullbrandt.

A Speech like a lesson from Solvang City Attorney Chip Wullbrandt made a  public announcement upon organized group’s appeal during the city council meeting in front of audiences and complaints  and he said :

“The application is  (Esko Kenny Lama’s application) for the only flower pots that are in front of his two stores. Actually people are going to have flower pots or other things on the sidewalk I’d like them to come in and get encroachment permits which are in fact required by the city. There is a requirement for flower pots and other things to get encroachment permits on the sidewalk. The city does have and has had since 1988 in its design guidelines a provision says the use of flower especially planted in pots boxes, window boxes, hanging boxes, and hanging baskets is encouraged so you actually encourage people to have those flower pots out in the front of their stores.

I walked around the town today and I would like to call Solvang the city of pots because they’re all over the Solvang Streets with floral pots many many many pots with many many many pretty flowers in the very pretty pots. We require people generally to have encroachment permits if you’re gonna let them have things on the sidewalk. I talked to the public works director today he said that historically probably historically means back in the 1980s when you first began to encourage people to have flowers including in planters and pots. People used to get encroachment permits and so many of the ones like a long  Alisal road. But I think like the ones in front of Rasmussen which are in more formal planters boxes. I suspect those actually got any encroachment permits.

Apparently people and perhaps over the last 20ish years people have not actually been coming in and getting any encroachment permits for their many many many many pots and so to the extent that this is about flowers in the flowerpots. Again we like people again to come in and go through the formal process. And as I understand the ( Esko Kenny Lama’s) application is for flowers in flower pots”.

Esko Esko store owner Esko Kenny Lama was not present during the City Council meeting due to a business trip abroad. However, he was reached through the phone to comment on the organized group’s move for his encroachment permit application.

Esko Kenny Lama said, “I watched their speeches from the video. It was like broadcasting live lies, lies, lies from City Council. What they said almost like a joke but I am not surprised to hear those lies but nothing else only lies and lies from them. Anyway, that is not something new to me. Since I opened my store, my competitor always wanted me to be banned from displaying flower pots and American flags at the front of my store. Even the former City Council passed a motion to restrict me from flying American flags just to please him. Since the City Council changed, but my competitor is still trying to ban me through these people. It’s funny because they don’t even live in Solvang! This show is produced by Joan Jamieson. My business competitor is using Joan Jamieson. If you remember during the previous City Council meeting, I made a public announcement that Joan Jamieson was doing things behind my back and used her BAR member power to force city staff to harass me and try to organize my landlords to evict me. It seems like her close friend and my new landlord Terry Harmon, along with her associates are asking the city to ban only me for displaying flower pots, American flags, and animal water bowls in front of my stores. It’s very ridiculous. Solvang is full of flower pots, flags, and pet water bowls. So, I applied for a permit from the new city administration to allow me to display at my storefront.”

Kenny Lama Esko also said: “I did all those to make my store more visible and more charming as well as to get more attention and to look beautiful ” but it seems especially Rasmussen store owner David Rasmussen is still not happy with my presence.  So he can have flowers and flags in front of his store but not me? So I applied for a permit to end this dispute so I can display flower pots and sticking American flags to the pots and place water bowls for our 4 leg friends in front of my stores just like others. Locals, tourists and dogs love it.”

Terry Harmon and her associates’ shocking appeal from Solvang City Council can be watched from the below link.