No tourists but a huge bear touring around downtown Solvang shops 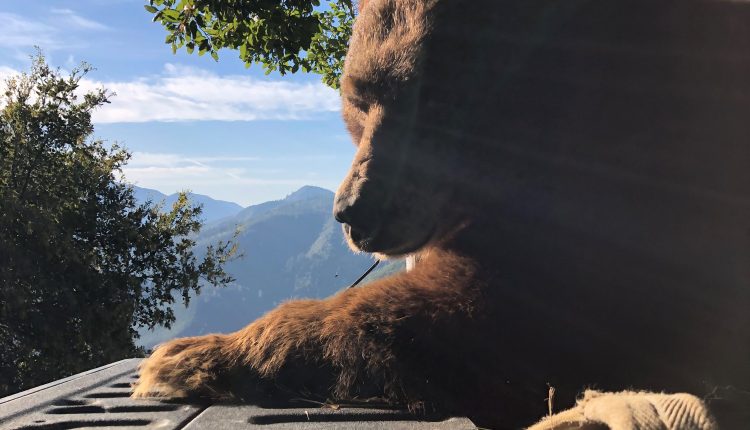 A huge bear was seen in front of Esko Esko store on Alisal Road last night.

Residents were told to shelter in place last night in Solvang after a huge bear was seen walking around between Alisal Road and Mission drive around 9.40 p.m.

An emergency alert was sent to the community just before 10 p.m. last night, urging residents to shelter in place due to “a dangerous animal in the area of downtown Solvang. The shelter in place order was lifted about 2 hours later.

At 10:45 p.m. Saturday night, Solvang Deputies and the Fish & Wildlife officers chasing him and he ended up settling at one of the Mission Dr store’s trash garbage enclosure around 3:30 a.m. Sunday morning.

Fish &Wildlife officers tranquilized the bear, because of his size, he needed multiple doses of medication to go under.   The bear was so large, between 350 and 400 pounds, a crane in the area was used to lift the bear into the back of a truck.   He was then transported to a release site, to the northeast.  Fish &Wildlife officers stayed with the bear until 9 a.m Sunday morning, before he was fully awake and able to move on.   He was tagged during this process, for later ID purposes.  The bear is male, an adult – no signs of injury.   According to some old residents, this isn’t wildly unusual for a bear to appear. Lt. Jamie Dosta a Fish&Wildlife officer who captured him said: “it was a hot a day and probably while he was looking for the water source but he ends up being downtown Solvang”.

Here is another Disappointment for Solvang’s Small Business Owners: