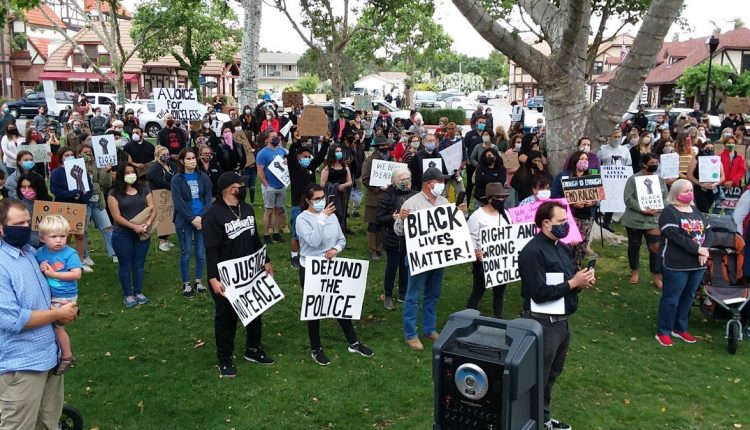 It was a historical day for the Solvang and Santa Ynez Valley communities, with nearly 500 hundred people – mostly white – gathering in Solvang Park to protest the killing of George Floyd and systemic racism.

A very peaceful protest was led by Bethania Lutheran Church Pastor Chris Brown, and it was supported by other local religious organizations as well as the Chumash Indian Tribe.

Many families participated with their elders and youngsters.

The crowd kneeled silently for nearly 9 minutes to honor George Floyd, and afterward, a local pastor led a non-denominational prayer, and the crowd listened to music and speakers sharing about racism. After the rally in the park, a large section of the crowd began marching up and down Mission Drive chanting: “No Justice, No Peace”, “I Can’t Breathe”, and “Black Lives Matter”.

Most people wore masks and brought signs, many of them denouncing racism and police brutality. Others recognized George Floyd and other black lives that were cut short.

Solvang Mayor Ryan Toussaint and City Council members Chris Djarnaes and Robert Clark, along with many local business owners were there among the protesters.

Unlike other protests around the county and the nation, Solvang’s protests drew almost no law enforcement as the crowd prayed and chanted and were urged by their leaders to be peaceful and not to harm any businesses or properties.

Some businesses near the park had boarded up their windows before the event because some anti-protest rumors but still some other businesses placed signs supporting the protest in their windows. The demonstrations were peaceful, with no damage or violence reported.