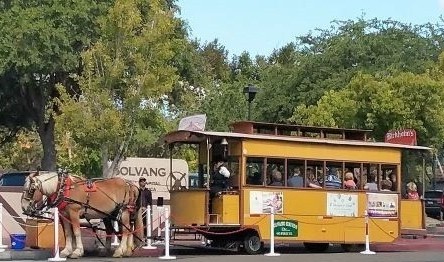 The City Council approved by 3-1 vote the renewal and are looking for the possible extension of Solvang Trolley Operator’s business license for another five years. This will override the 1-year carriage license term established last year in September which expired on June 30.

While nearly 50 people showed up to show their support for the horse trolley during the heated meeting, Mayor Ryan Toussaint broke his gavel, and other members expressed a lot of emotions during the council meeting. Council Member Karen Waite quietly shed a tear, and Council Member Daniel Johnson was absent.

Mayor Ryan Toussaint said “I think it’s ridiculous to have this show every year for business. How can you invest in your business, how can you make strong decisions to move forward if you could be gone in just a few months,” and he suggested the license should be given for 5 years.

Meanwhile, City Council Member Robert Clark “I want this trolley. I like the trolley. The residents like the trolley. The visitors like the trolley. So I’m in support of the trolley, but I’m tired of all the other garbage that goes on in this place”. He stated that local papers like Solvang Journal and Santa Ynez Valley Star of sensationalizing news and told people not to believe the information written on the said media. Just because of Solvang resident and long-time animal activist Hazel Mortensen, 83, who sent a letter by email regarding Solvang Trolley Operator to the City Council and it was published on Solvang Journal. In her letter, she criticized the trolley operator and claimed that the company was given too many financial favors in the past. She also went and called it as an animal cruelty business.

According to Mrs. Mortensen, “Horses are not meant to work on blacktop and inhale car fumes for hours, especially during hot summer days. Horse trolley as entertainment is not a Danish tradition, but a cruelty business can be seen anywhere. Solvang is a Danish tourist town, which is why dated and senseless practices that come at the expense of sentient beings’ freedom and well being should be removed from Solvang.” She added, “This contract renewal is a big victory for trolley operator, but what about for horses?”

Aside from Council Member Chris Djernaes, there was no other opposition to express their voice during the City Council’s meeting. The City Council Member Chris Djernaes said “Horse trolley business is no meaningful sales taxes, permit and encroachment fees, parking in lieu of fees or complimentary spending. The City is not a charity and cannot afford to give away a free legal monopoly that produces no measurable economic benefit to the City”.

Under the renewed trolley operator accord, costumes and vehicles must comply in appearance to the city’s Danish theme, animals must be maintained in a manner that is safe for both people and animals, and streets must be kept “reasonably free from animal excrement and urine.

Routes and operating hours “will not substantially or unreasonably adversely deteriorate the quality of traffic or the congestion along its routes,” and the “council may limit the number, times, and routes of such animal-drawn conveyances.”

The horse-drawn carriage & horse trolley industry has been declining as time progresses due to many animal rights organizations including the Humane Society of the United States and PETA, that have been campaigning for the ban across the country.

For over 150 years, horses have deteriorated the roads in Chicago and the Chicago City Council voted to finally ban horse-drawn carriages and trolleys last April.

According to the PETA and Humane Society, Chicago is now one of many other cities across the nation that have already banned horse-drawn carriages and trolleys. Other cities that support the ban include Santa Fe, Las Vegas, Reno, Camden, Biloxi, Salt Lake City, and many others. Multiple cities in Florida, Key West, Palm Beach, Pompano Beach, and Treasure Island are also pro-ban. Soon, the New York City Council is also expected to follow this step.