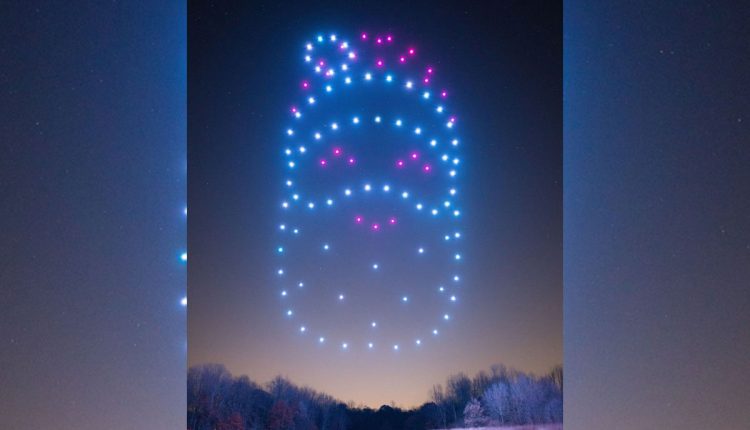 Forget holiday fireworks or the house with 5 million strings of lights. Instead, think drones, lots of them, creating images in the sky of Santa’s sleigh and reindeer, candy canes and a Christmas tree.

Southern California’s only holiday drone show will take place Dec. 21 in the Danish-themed village of Solvang in the Santa Ynez Valley as part of its Julefest (pronounced “Yule-fest”) 2019 celebrations.

It’s a first for the city, which is spending $50,000 for the one-night light show. “The drone show is very sustainable and doesn’t produce any noise,” Mayor Ryan Toussaint said, comparing it with fireworks displays.

The show, called “Aurora Dronealis,” lasts 15 to 20 minutes in a display many in the area will be able to see for free.

However, a grandstand seat downtown is an ideal viewing spot and the only place to hear accompanying music. Tickets cost $15; VIP seating (first five rows, plus a T-shirt) is $100, and the VIP Experience, which adds a meeting with the drone pilot and a firsthand look at the drones, is $500.

One pilot will be responsible for 100 drones outfitted with LED lights that will create the images 100 to 400 feet in the air. You’ll be able to see them at a distance, but standing or sitting within 1,000 to 3,000 feet offers the best viewing.

What do drones have to do with the town’s Scandinavian vibe? Nothing, except they offer something new and different. “We want to establish Solvang as the Christmas destination in California,” said Scott Shuemake of IDK Events, which is producing the Julefest.

The drone display is one of many holiday events the town puts on. The city will have a tree-lighting ceremony on Dec. 6, a Julefest Parade on Dec. 7, a light parade with illuminated floats in honor of Saint Lucia Day on Dec. 13 and candlelight walking tours at 5 p.m. on Sundays in December. Kids who take pictures of a dozen Danish Christmas elves (known as Yule nisse) hidden around town can collect a prize at the visitor center.

Danish Americans founded Solvang in 1911, though the town wasn’t incorporated until 1985. You’ll find plenty of Danish-style design in the buildings and businesses and, for one night, drones, in the town that’s been a tourist stop for decades.

Check yourself if you are infected by Coronavirus!

The city of Solvang Hosted The 2020 State Of The City yesterday.

City of Solvang Presents The 2020 State Of The City